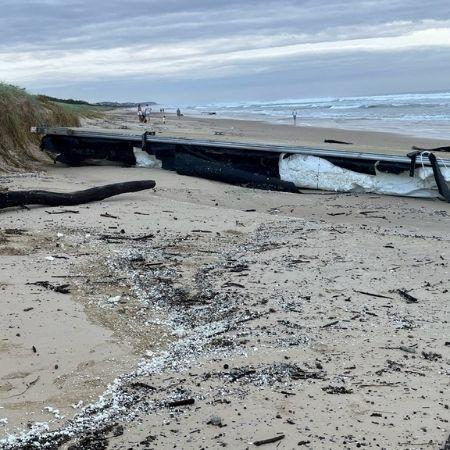 Polystyrene debris and pontoons have washed up along Noosa’s eastern beaches.

The polystyrene is from pontoons washed ashore in Noosa after being swept out to sea by the Brisbane floods.

Council and Maritime Safety Queensland (MSQ) staff have spent today removing the larger chunks of polystyrene and pontoons from the shoreline.

“We’re seeing waves of polystyrene beads washing up along the eastern beaches. They’re often smaller than beanbag beans but they get into the food chain where they can create all sorts of issues,” he said.

“The more of that small particulate matter that we can remove from the water, the better off our marine ecology will be.”

Council staff are out and about along the beaches during low tide removing polystyrene, while MSQ is coordinating the salvage operation to remove the pontoons.

Mr Walsh praised locals for their clean-up efforts over the weekend.

“The Peregian Beach Community Association and the Eastern Beaches Community Bushland Care Groups in particular have done a great job collecting the polystyrene particles to date and we look forward to broader community involvement.”

Mr Walsh urged residents to stay away from sand cliffs – caused by recent big seas – during high tide and to stick to low tide if taking part in clean-up activities.

“We’ll have supplies of clean-up bags at the popular beach access points from noon tomorrow. Anyone helping with the clean-up is welcome to take a bag to fill up and drop it back to the beach access point when they’re done,” he said.