“I write this letter in the hope that you and your business will show some compassion for the community you have chosen to work in.”

Cr Stewart added the current quarry operations at Kin Kin are causing a great deal of angst within the Noosa hinterland communities and proving intolerable for many. 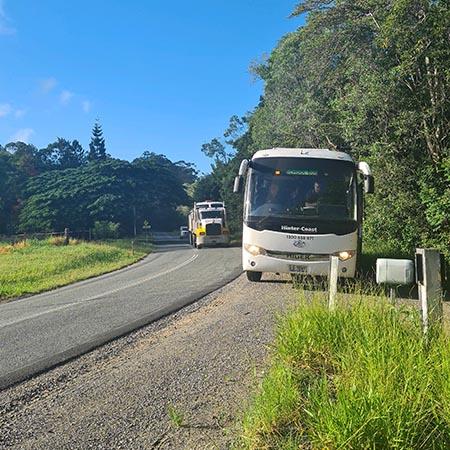 There are concerns for school students' safety due to the high volume of quarry trucks on the road at Kin Kin during school times.

The letter states, “Safety continues to be our number one concern. Not only for our residents, but also our local bus drivers and even tourists are becoming increasingly frightened for the safety of their loved ones.”

The Mayor was today joined by Noosa MP Sandy Bolton and mother of four (three of whom ride the school buses) Anita Poteri calling on the company, as a good corporate citizen, to stop trucks during school bus times and significantly reduce truck movements to a more manageable level.

“This would clearly show Cordwell Resources is community-minded and shares our concerns about safety, especially for our local children,” she said.

“I fear the worst is inevitable unless something is done.

“None of us want to see an accident involving a quarry truck and our local school buses,” Cr Stewart said.

“The trauma to our community cannot be underestimated. Even though TMR and QPS have done everything in their role to increase safety, it cannot offset the danger of high volumes of trucks,” she said.

“Access routes were independently assessed as not capable of dealing with this volume. That Council and State powers cannot reduce these numbers, is the worst case of system failure I have ever seen,” Ms Bolton said.

“We continue to investigate every option available to us, but implore the operators to work within that independent assessment from 2010 to demonstrate compassion for these communities and prevent a tragedy.

“There needs to be a co-operative approach from all parties to find a compromise,” she said.