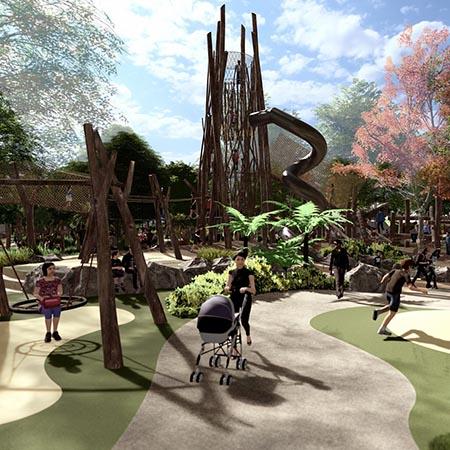 “We’ll be doing all we can to get the playground completed in December to give local and visiting children a treat in time for the festive season,” she said.

Designs for the all-abilities playground include a double flying-fox, climbing tower with slide, climbing structures with swings, water play area, picnic shelters and an amenities block.

“Following today’s decision the contractor can now formalise the concept designs and break ground on the Cooroy site shortly,” the Mayor said.

“They have a strong track record with Council, they are highly capable and well resourced,” he said.

Mayor Stewart said that by working with prospective contractors as part of the procurement process, Council was able to keep costs down without compromising on the designs.

“We have stayed true to the original brief which was for an iconic, nature-based, all-abilities playground that will attract people to Cooroy and cater for locals too,” the Mayor said.

“We’re thrilled to receive $2.78M from the State Government toward the cost of delivering this exciting one-of-a-kind facility for our community.

“Nature-based playgrounds not only offer children obvious exercise benefits but they encourage their social and emotional development, cultivate their imaginations and an appreciation of nature,” Cr Stewart said.

As part of the development, Cooroy will also gain new car parking spaces and new public toilet facilities, which the community asked for.

Council last week approved a Material Change of Use application for the Maple Street site, with conditions to address flooding concerns, including a flood warning system and fencing.

Construction of the parking area forms part of a separate tender process, which will be reported to Council for a decision shortly.