A group of 20 hinterland residents is helping gather evidence to support Noosa Council’s proposed legal action against operators of the Kin Kin Quarry. 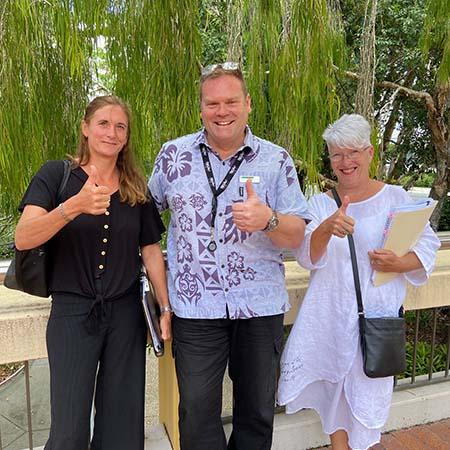 Mayor Clare Stewart said residents’ input would be pivotal to the success of any legal challenge.

“The efforts by the impacted residents is a tangible example of a community-council partnership working to deliver a positive outcome,” she said.

“The residents are best placed to describe the environment, noise impacts and other amenity issues which relate directly to the quarry’s truck movements,” she said.

“We are united in doing what we can to address this community issue,” she said

To assist in preparing the legal case, residents have volunteered to complete a 30-question survey. It asks them to detail the current environment, the nature of the impact of over 200 truck movements daily, dust problems in the area, plus it seeks their thoughts on the best way to address community concerns.

Today’s Roundtable meeting with the Kin Kin community and representatives heard how Council had issued a further $27,000 in fines to operator Cordwell Resources for alleged breaches of the Quarry Management Plan relating to truck movements.

“The community appreciates the empathy and collective efforts of Mayor Stewart, council staff and Sandy Bolton,” she said.

“The proposed legal action against the current operator warrants the full support of the community. Huge trucks on narrow roads just don’t work.”

“We moved to the hinterland for a peaceful lifestyle and have fought this quarry for more than 10 years now, so to have such strong support from our civic leaders is encouraging.” Ms Bonsall said.

Cr Stewart said “There are no guarantees but a united approach gives us the best chance for success in the Planning and Environment Court.

Member for Noosa Sandy Bolton has written to the Premier and relevant state government departments demanding further action for the safety of residents.

“This issue is a priority for all of us and we are awaiting the engineer assessments of the haul route and timber bridges by Transport and Main Roads,” she said.

“There has been considerable progress since our first meeting last August and the united approach is the most effective route to find workable solutions.”

Further talks with a preeminent Brisbane-based Barrister will take place in coming weeks in the hope of finalising the legal case for the Planning and Environment Court.