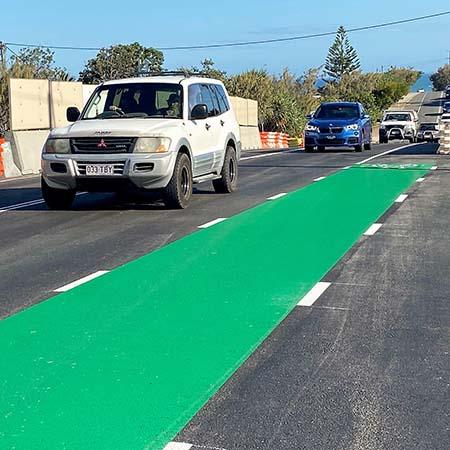 Work on the $3.8 million bridge replacement started in mid-May, and in just under four months, the previous bridge has been demolished, nine concrete decks installed and new asphalt laid to provide a wider, stronger bridge.

Line marking was completed today with the bridge opening shortly before 3pm.

Noosa Mayor Clare Stewart said the re-opening was an exciting time for all concerned.

“It’s never easy rebuilding a bridge on a busy road which is used by 12,000 vehicles a day and I appreciate the patience and understanding from residents.

“Contractors and staff have worked diligently to deliver the project as quickly as possible,” she said.

“Today has been a much-anticipated re-opening for many of the locals and the finished product will deliver major benefits to all users."

The $3.8 million project is jointly funded by the Australian Government and Noosa Council.

The re-opening of the bridge means a detour, which has been in place at Sunrise Beach, will be removed and on-street parking reinstated along the detour route.

Orealla Crescent, the road underneath the bridge, will remain closed until all works are completed.

Contractors SGQ expect to be onsite for another month to complete landscaping and install bridge railings and other minor works.

Cr Stewart acknowledged the partnership with the Australian Government in delivering the critical bridge infrastructure.

“I’d like to thank the work of Federal member Llew O’Brien in supporting the project and it’s another tangible example of our strong partnership with the local member and the Federal Government,” Cr Stewart said.