An excavator and D6 dozer will on Monday boost efforts to remove the remaining washed-up pontoons from Noosa’s beaches. 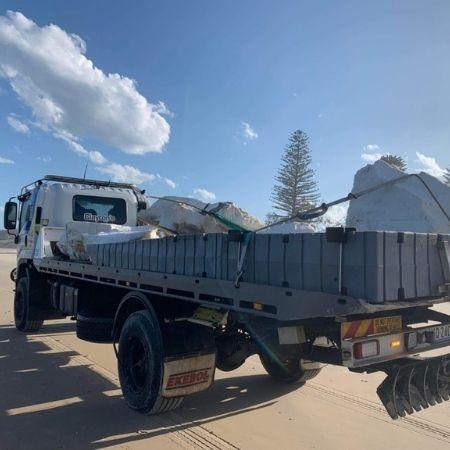 The salvage effort to remove washed-up pontoons and other debris from Noosa's beaches continues.

Once it arrives, the salvage effort is expected to take several days.

Acting Environmental Services Manager, Shaun Walsh, said Council staff were tarping the pontoons – where possible – to reduce further polystyrene breaking off and polluting the beaches over the weekend.

“We can’t use industrial cling-wrap to prevent further polystyrene from breaking off as it’s not proven to work well in wet environments and it will likely unravel and create additional environmental issues,” he said.

“Our crews will continue to monitor the sites over the weekend and remove any new debris,” he said.

The pontoons washed ashore along Noosa’s eastern beaches and Noosa North Shore during the floods, carried north from Brisbane.

Three pontoons remain along the eastern beaches – one at Sunrise Beach and two at Peregian Beach - plus a large piece of debris.

Traffic control will be in place at times around Noosa’s eastern beaches from Monday as the pontoons are removed and transported.

“We appreciate the community’s patience while the salvage effort continues.”