Major work to upgrade the Noosa Parade corridor, one of Noosa’s busiest pedestrian and cycle routes, is a step closer following the awarding of the construction contract. 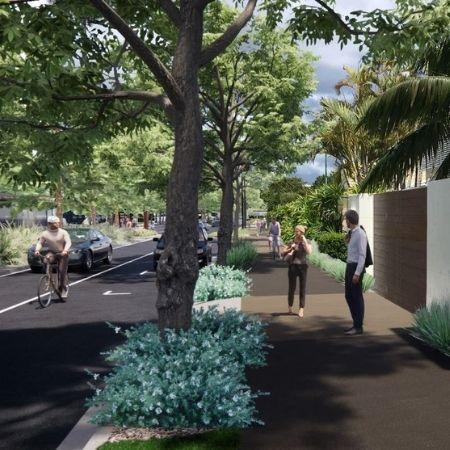 Council will plant over 350 trees and 8000 shrubs and ground cover plants as part of the Noosa Parade corridor upgrade.

Mayor Clare Stewart said the 1.2km major upgrade will provide improved and safer access for all road users as well as improving the visual amenity of this significant gateway to the busy Noosa Heads precinct.

“The Noosa Parade corridor upgrade will deliver dedicated and continuous on-road cycle lanes in both directions and a permanent reduction in the speed limit to 40km/h,” Cr Stewart said.

“The community will be able to enjoy a 2.5m wide concrete pathway on the northern side of the road complimented by a 1.5m wide pathway on the southern side, providing plenty of space for people walking, cycling, pushing a stroller or carrying a surfboard.

“Crossing Noosa Parade will be made easier by eight mid-block, cut through pedestrian refuges along the route and new low energy LED lighting will improve use of the pathway after dark.”

To accommodate the enhanced pathways, there will be a slight narrowing of the median strip and removal of some existing vegetation in Council’s road reserve.

“Whilst the upgrade will require removal of some vegetation, enhanced landscaping including a better selection of trees and more appropriate plantings will see Council plant over 350 trees and 8000 shrubs and ground cover plants as part of the upgrade,” Cr Stewart said.

Noosa MP Sandy Bolton welcomed the works with partner funding provided by the State Government for projects that have been prioritised by Noosa Council, and thanked Minister Mark Bailey, TMR and Council for these partnerships that benefit our community.

"We are advised that, on average, every dollar invested into alternatives to driving cars including walking and bike-riding infrastructure returns nearly five dollars in benefit to our communities through improved health outcomes, reduced traffic congestion, and parking issues,” Ms Bolton said.

“I look forward to the completion of this upgrade and taking a walk or ride to test run the differences this can make.”

“Delivering the Noosa Parade corridor upgrade will kick off in February 2022 and planned to be completed prior to the Noosa Triathlon later in the year,” Mr Sengstock said.

“We won’t sugar-coat the impact of this project on the community. There will be impacts including detours and delays for motorists and pedestrians and additional inconvenience for residents whose properties sit within the construction footprint on Noosa Parade,” Mr Sengstock said.

“Council has undertaken extensive community and stakeholder engagement during the design and development phases of the project and, in partnership with Bellwether Contractors Pty Ltd, continue to work with the community to provide updates as works progress.”

The construction of the $8 million Noosa Parade corridor upgrade is partially funded by the Department of Transport and Main Roads through the Cycle Network Local Government Grants program with the balance funded by Council.