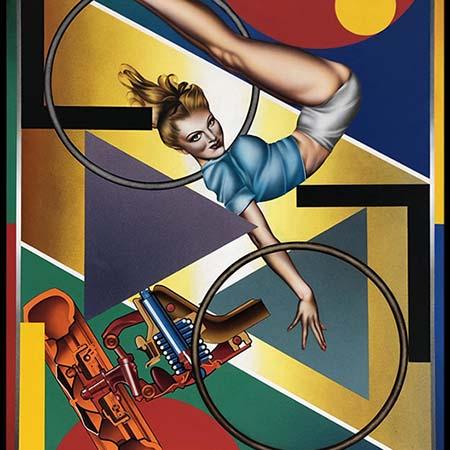 “Phillips created these artworks at varying points throughout his exceptional career, spanning more than 50 years. They have travelled with him around the globe and continue to adorn the walls of both his studio and private residences.”

As a ‘pop art’ movement originator, Peter Phillips trained at the Royal College of Art in London with his contemporaries David Hockney, Allen Jones and Ronald Kitaj, among others.

Internationally acclaimed, his work has been exhibited in countless solo shows, projects and retrospectives.

Having many times exhibited alongside his American counterparts Andy Warhol, Roy Lichtenstein and James Rosenquist, the artist’s friends and contemporaries read like a Who’s Who of 20th Century art.

Says Phillips, “I was painting stuff that was familiar to other people, however it wasn’t imagery that they expected to come from an artist, they thought that an artist painted landscapes and portraits… and I was painting cars and pin-up girls and then it ended up being called ‘pop art’. It was a new way of thinking about the world that we live in, exposing particular things that people didn’t even consider as art.”

Like Phillips and his contemporaries - whose revolt against the ‘dour traditionalism’ of art school paved the way for a new art movement - local artist Petalia Humphreys employs a sense of playfulness to engage with her audience.

“With hard-edge, geometric forms, my work encourages an interactive approach, inviting the audience to engage in playful ways, considering ways of looking, perceiving and viewing the work within the gallery space,” Humphreys says.

A form of abstract art, the artist’s reductive cube paintings challenge tradition, by occupying corners and by being hung in positions outside the traditional audience eye-line.

“Humphreys focuses on the relationship between objects and the spaces they occupy – how geometric compositions relate to one another within an art work, and the relationship the artwork itself has with the exhibition space.

“The artist’s geometric works are bold, vibrant and inspired by the Noosa Regional Gallery space.”

Visit the Gallery's website for full details about the opening event on Friday, July 16, 2021.