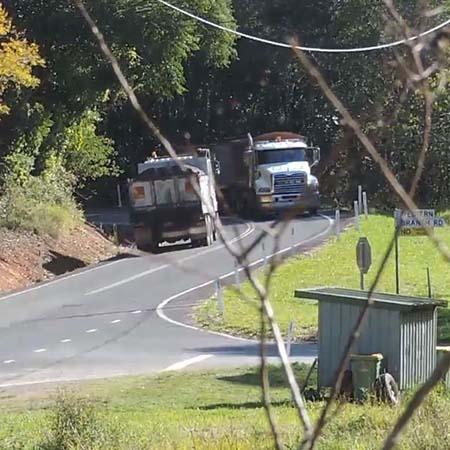 “This is about preventing an accident or a fatality,” the Mayor said. “Based on the feedback from our community, there is a genuine likelihood of that occurring in the foreseeable future.”

In letters to Main Roads Minister Mark Bailey, Mayor Stewart says the community is at “breaking point”, with the quarry operation having “catastrophic repercussions” for local residents.

“Kin Kin residents are increasingly frightened for the safety of their loved ones, especially their children who regularly have to cross roads used by quarry trucks travelling at significant speed,” she said.

Provisions in the Transport Infrastructure Act allow the state to restrict the use of its roads in order to prevent damage to road infrastructure or to ensure the safety of road users.

“We have advised the state government that Pomona Kin Kin Road is not fit for purpose for handling quarry trucks and passing cars, especially buses,” the Mayor said.

“The school bus shares the same route at the same time as many quarry trucks and we’re hearing reports about the school bus nearly being run off the road, as well as near misses involving students on the roadside.”

The state can apply temporary restrictions based on vehicle class, time of day and load weight.

“I call on the Minister to act as legislation allows him to limit the impact of truck movements. Please Minister, act now before there is a fatality rather than acting after a major accident occurs.

“Instigating this legislation will help to safeguard against an accident, or even worse - a fatality,” the Mayor said.

“We owe it to our community to avoid a foreseeable loss of life, particularly in relation to children on school buses. I call on the Minister to step in.”