New Mobile Library to hit the road in December

A brand new, more versatile, Mobile Library packed with more than 2500 items will hit the road in December. 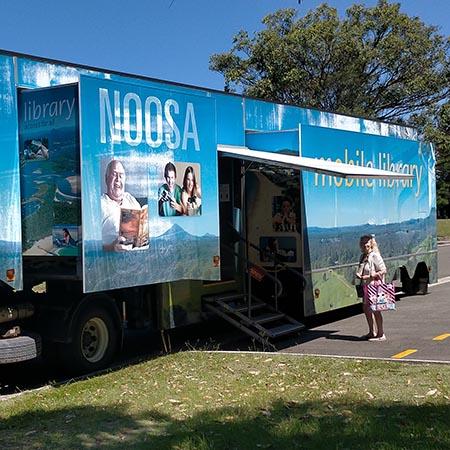 The Mobile Library, which has been on the road for 15 years, will be replaced later this year.

Equipped with an air-conditioned browsing section and an awning-covered alfresco area, the new Mobile Library will replace the existing vehicle which has been on the road since 2006.

“Having a smaller, more modern vehicle will enable our library team to venture into new areas of the shire that the current vehicle can’t access due to its size,” she said.

“Customers will be able to board the new Mobile Library to browse the collection and enjoy the social aspect of meeting friends or attending a workshop under the awning-covered alfresco area.”

To extend access to library collections even further, Council will roll out two library ‘book-vending’ kiosks, each stocked with more than 300 items, Libraries and Galleries Manager Tracey King said.

“These changes, which have been two years in the making and the result of community feedback, reflect our customers’ changing needs,” Ms King said.

“When the current vehicle took to the road 15 years ago, there was no library in Cooroy to service the hinterland, demand for public computers and Wi-Fi was much greater and library collections were predominately print-based.

“Nowadays multi-media formats are flourishing, and the library offers a large collection of e-resources online which people can access from home across all sorts of devices.

“Although Mobile Library visitors have roughly halved in the past decade, the service is still highly valued and our customers have told us they still want the convenience of accessing mobile collections, which we’re answering with the new vehicle and other additional new library services,” Ms King said.

The new Mobile Library will continue to visit existing stops on a weekly schedule, and with the additional library kiosks at Pomona and Peregian Beach – the two most popular stops – residents will be able to borrow books 24 hours a day.

To make access to library services even easier, Council will be developing a new schedule of library learning workshops which will be hosted at community locations across the shire.

Ms King said the changes would be rolled out in stages with the new Mobile Library to be on the road in December, and the 24-hour kiosks up and running toward the middle of the year.

The new Mobile Library will be Noosa Shire’s fourth. The first one, a bus, hit the road in 1974, before a more modern version arrived in 1992. That vehicle served the community until 2006, when the current truck and trailer model arrived.

“This is an exciting new chapter for the Mobile Library and we look forward to welcoming the community aboard later this year.”