The $3 million upgrade of Hilton Terrace reaches a key milestone later this month, with work to start on the new roundabout at the intersection of Ernest Street and Hilton Terrace. 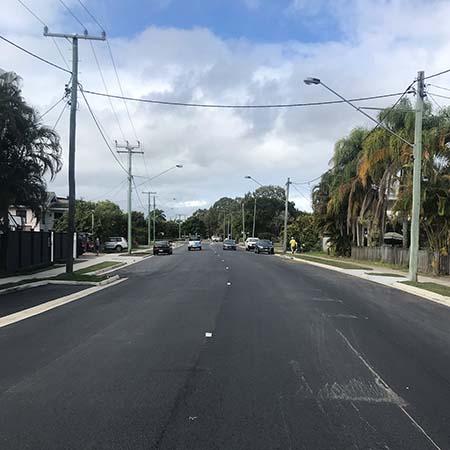 Work on the Hilton Terrace upgrade is progressing. So far, over 400 metres of new pathway, 800 metres of new kerb and channel and asphalt works have been completed between Doonella Bridge and Hilton Esplanade.

“This intersection is one of the busiest in the shire and the new roundabout will improve safety while helping to keep traffic flowing, even during peak times,” Mr Billingham said.

Project Coordinator Cody Johnston said the roundabout works would be completed in two stages to minimise the impact for the many motorists that use the intersection.

“Stage one, scheduled to start about Monday 22 June, will involve upgrading drainage and widening sections of the existing intersection to accommodate the new layout,” he said.

“The second stage will involve the excavation and construction of the roundabout.

“The intersection will start to operate like a roundabout during this phase, which will allow work to be undertaken without closing off any lanes to traffic completely.

“It will be particularly important for motorists to stick to reduced speed limits and follow signage about changes to the layout of the road given how close roadworkers will be to traffic.”

Mr Johnston said there was still some works required before the whole upgrade project was complete.

“Our contractors are working hard to have the job finished before August, despite wet weather and ground conditions. They’ve also been flexible with the staging of work to reduce the impact on the community.

“For example, they resurfaced Earl Street earlier than planned to make the most of reduced traffic to Tait Duke Cottage during the COVID-19 restrictions. This will mean less impact on community groups as they return to the site now restrictions have eased.

“The finishing touches, such as beautification works, linemarking, and the last of the drainage upgrades, will be done after the roundabout and pavement works are finished,” he said.

“Connection of the shared path from Noosa Lakes Resort to Tait Duke Community Cottage will also be completed.

“We appreciate the patience and support shown by the local community and motorists on this project, and look forward to being able to show off the finished product soon.”