Contemporary artist Abdul Abdullah will discuss his provocative embroidery pieces All Let Us Rejoice and For We Are Young and Free, and the recent public response, when he visits Noosa Regional Gallery next week.

Abdullah’s work appears in the nationally touring exhibition Violent Salt, which is on show at Noosa Regional Gallery until January 26. 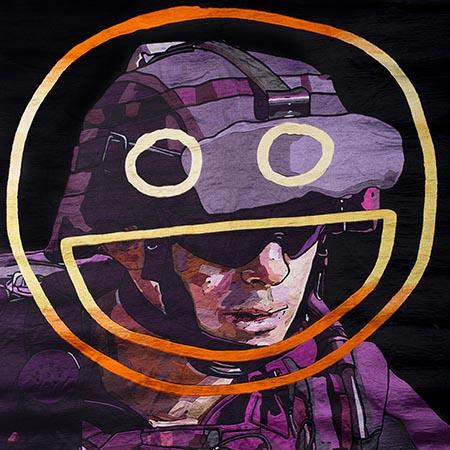 Abdul Abdullah's tapestry We are Young and Free, features in the Violent Salt exhibition, which is showing at Noosa Regional Gallery until January 26.

The seventh-generation Australian will respond to criticism of his work, which he says has been misinterpreted.

The artworks, which depict military figures overlaid with smiley face emojis, were removed from the Mackay exhibition, prompting national debate about censorship and free speech.

Noosa Regional Gallery Director Michael Brennan said the Gallery was pleased to be the second venue in the exhibition’s national tour.

The Gallery’s decision to include Abdullah’s work in its iteration of Violent Salt met praise from the National Association for the Visual Arts (NAVA), with Executive Director Esther Anatolitis applauding the Gallery for showing “cultural leadership”.

Developed by Artspace Mackay and curated by Yhonnie Scarce and Claire Watson, Violent Salt assembles works by contemporary artists from across Australia. It explores themes of marginalisation, racism and discrimination, plus attitudes to other cultures.

“Having Abdul visit the Gallery to talk about his contribution to this exhibition is an opportunity not to be missed. It will be great to hear directly from the artist as opposed to the sensational and often misguided interpretations of his work that have sadly played out in the press and on social media,” Michael Brennan said.

Abdullah explores the experience of the ‘other’ in society, with particular focus on young Muslims’ experiences in contemporary multicultural Australia, Mr Brennan said.

Violent Salt aims to give voice to underrepresented Australians, providing a context for discussions about racism and discrimination, Mr Brennan said.

Ironically, misrepresentation of Abdullah’s tapestry works sparked a torrent of abuse, making particular reference to his name and assumed ethnicity.

“It’s very frustrating (that) I have to justify my pretty non-controversial political comments alongside my position or my legitimacy as an Australian,” Abdullah said.

“Not that it matters, but my family have been here for 200 years, but I’m still getting emails telling me to go back to where I came from. I wonder if my name was different whether this would be news at all.”

Abdul Abdullah is a four-time Archibald Prize finalist and three-time Sulman Prize finalist. His works are featured within the permanent collections of the National Gallery of Australia, Queensland Gallery of Modern Art and Museum of Contemporary Art Australia, among others.

Abdul Abdullah will be speaking at a free event at Noosa Regional Gallery on Thursday, 23 January 2020 from 5pm. Bookings are essential, via the website.